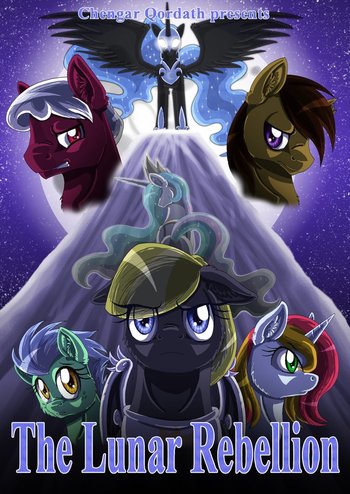 A Recursive Fanfiction of Chengar Qordath's The Life and Times of a Winning Pony My Little Pony: Friendship Is Magic fanfic, The Lunar Rebellion

follows the exploits of Shadow Kicker, the Famous Ancestor of the original story's protagonist.

One hundred years after Nightmare Moon's banishment and defeat, Shadow Kicker is one of the five Ephors of Pegasopolis, and is fiercely loyal to her home and culture. However, when Pegasopolis rises in revolt against Celestia under the flag in Nightmare Moon, she finds herself torn between her loyalty to her home and heritage and her loyalty to her ruler.

The story is complete with multiple sequels.

: When Queen Celestia has to temporarily leave Equestria on business, she needs someone to look over the kingdom in her absence. Much to everyone's surprise, she chooses the ambitious Sunbeam Sparkle to serve as her regent rather than the steadfast and loyal Shadow Kicker.

However, Sunbeam has little time to ponder why her monarch chose her. The Golden Path of Freeport, a corrupt regime ruled by false gods, sees Celestia's absence as an opportunity. Now Sunbeam must face a foe that claims to be every bit Celestia's equal, and with no divine powers of her own...

: Equestria is a nation on the edge of disaster after the devastation caused by the Lunar Rebellion. Beset on all sides by nefarious enemies, vicious foreign invaders, insane Lunar cultists, malicious fey, and diabolical conspirators all threaten Equestria’s borders and stability. Midnight Sparkle, daughter of Archmagus Sunbeam Sparkle and herself a newly minted Magus of Equestria, soon finds herself embroiled in the chaos surrounding her homeland. But what hope does a single unicorn have against so many overwhelming threats?

Tropes in The Lunar Rebellion include:

Tropes in Midnight's Shadow include: