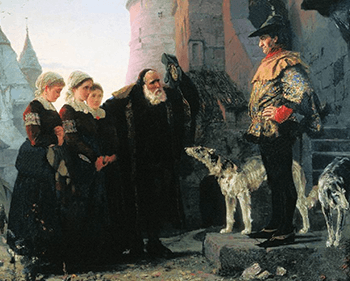 "Le Droit du Seigneur" (Vasily Polenov, 1874)
"They take our wives, if they want them, before the first night and say it’s their right. They give them back and tell us they’re better broken in."
— Nolan, The Victors Project
Advertisement:

Droit du seigneur, literally "the lord's right", also known as ius primae noctis ("law of the first night") and other names, is an alleged legal right that the lord of medieval estates or fiefdoms has to take the virginity of his serfs' maiden daughters (or at least gets first refusal). It is a popular trope in fantasy or medieval European settings, especially of the Crapsack World flavor. Usually invoked by a Feudal Overlord of the evil variety as one of his many Kick the Dog moments.

The historical basis for the "right" is murky, as discussed on the Other Wiki.

Though historians have found no evidence that this practice was codified in the law of any country, other historians argue that it was practiced informally and extra-legally as early as in the times of the Roman Empire and as lately as the turn of 'the' century (which century is never really specified). The last reliable records regarding droit du seigneur are from 19th century Imperial Russia, where well-documented criminal cases existed that accused various noblemen of (illegally) practicing this (not trying, but actively practicing for years until someone reported it to the authorities).

It is thought that belief in the existence of droit du seigneur in the West may have come from the customary practice of lords demanding a cash payment upon the marriage of a fief's (or an unfree tenant farmer's) daughter. note Indeed, monarchs sometimes claimed a right to cash payment when their vassals' daughters married. King John's attempts to do this is one of several resentments about feudal dues that led to Magna Carta and the First Barons' War; a reflection of this is the clauses forbidding the King from forcing noble widows to remarry (while preserving the royal veto on marriages by barons). Keep in mind, though, that most lords owned dozens to hundreds of manors (basically estates) scattered throughout their monarch's lands, each of which was the home to dozens, sometimes hundreds, of tenant families; most lords would never have so much as set eyes upon the majority of their lands, so how could they have practiced droit de seigneur?

The final nail in the coffin of droit de seigneur (in Western Europe at least) has been genetic genealogy, which has found no evidence for the supposed practice. The most common 'non-parental event' in medieval England seems to have been unofficial adoption, often of siblings' children.

The trope appears as early as the 19th century BCE, when The Epic of Gilgamesh uses it to illustrate Gilgamesh's arrogance, wantonness, and immaturity in his early reign. The trope was popularized and treated as a reality in works written during the Enlightenment (notably in Beaumarchais's and Mozart's The Marriage of Figaro), as the droit du seigneur was seen as embodying the abuses of the aristocracy and/or the supposed barbarism of the Middle Ages. To this day there are more examples of backlash against the supposed law than there are chronicled occurrences of it.

Subtrope of I Have You Now, My Pretty and a way to establish that Aristocrats Are Evil. If it's the Dung Ages, expect the lord to say "Bathe Her and Bring Her to Me." The Scarpia Ultimatum is a related concept, done with less legal backing.