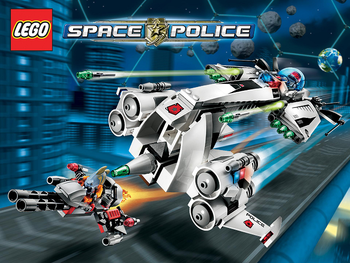 "LEGO Space Police" is a term referring to three separate-yet-related LEGO themes which, much as the title suggests, are about Space Police organizations.

of three Space Police themes, unofficially known as "Space Police I" among fans, made its debut in 1989. Their uniforms are nearly identical to Futuron, but stick strictly to black and white suits with red visors. Their ships also have a distinct color scheme of black and blue with red windshields. Space Police set the standard for their mechanical designs and the practice of carrying interchangeable cells aboard all but their smallest vessels. Space Police I emerged during the transition from Blacktron to Blacktron Future Generation and dealt with both in their respective periods of activity. A handful of Space Police sets contained Blacktron characters for the police to pursue and apprehend.

ran from 1992 to 1993, save for a single promotional in 1998. Markedly more regimented than in their previous appearance, the second run of Space Police features a police force that finally has its own distinct uniform and new-yet-familiar updates of older vessel designs in a new color scheme. They've been seen in opposition to their fellow second-generation faction Blacktron Future Generation, but they've also sought out Spyrius agents late in their cycle.

After a sizable Sequel Gap, Space Police was revived in 2009 and ran until 2010, and this revival is commonly called "Space Police III."

The reboot was a seismic shift in design aesthetic, both for the police and their targets; the line now played host to a wide variety of alien criminals and their vehicles.

As far as LEGO themes go, Space Police as a whole has always been one of the more popular ones; you could practically hear the entire fanbase cheering over the 2009 revival.

Tropes used in this toyline: