Fanfic / The Life and Times of a Winning Pony 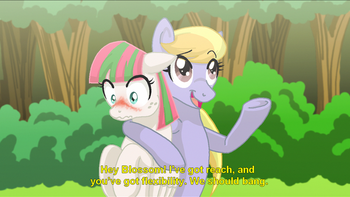 "I've got reach, and you've got flexibility! We should bang."
Advertisement:

The Life and Times of a Winning Pony

) is a My Little Pony: Friendship Is Magic fanfic by Chengar Qordath. The story tracks the life and times of Cloud Kicker, a fun-loving Ethical Slut with a tendency to have lots of random sexual encounters and end up in wild misadventures. The story weaves reasonably well into actual episode screentime, and also points out some of the cronyism inherent in Equestrian society. It is complete and also has a finished sequel, The New Life of a Winning Pony

There is also a prequel, The Lunar Rebellion, set nine hundred years before the events of the show and focusing on Cloud Kicker's Famous Ancestor Shadow Kicker, one of Celestia's lieutenants during the Lunar Rebellion, when the pegasi of Pegasopolis rose in revolt against Celestia under the flag in Nightmare Moon. It is completed.

Side-stories and recursive fanfiction for this fic have been written by numerous authors, and these are collectively referred to as the Winningverse. They range from the comic tale of Pinkie Pie's attempts to make a romantically dense Rainbow Dash realize her affections, to the more serious story of Derpy Hooves running off to Ponyville after being kicked out from her family for an unplanned pregnancy. There is also The Freeport Venture, a series of stories (beginning here

) focusing on Sunset Shimmer during and after her stint as Celestia's student, centering mostly on her adventures in Freeport, and which are related to the main Winningverse mostly by a shared setting and backstory, although the narratives are quite separate, as the Sunset stories are set some years before the events of the show proper.

This fanon universe also splits off into six Alternate Universes: