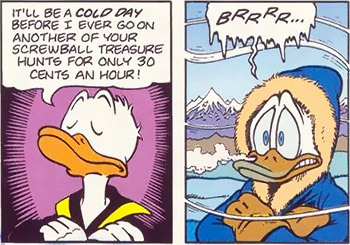 Be Careful What You Wish For.
"I don't know what happened. I declined his invitation, he started laughing, and then the next thing I knew, we were at lunch. Did he drug me?"
— Ron Swanson, Parks and Recreation
Advertisement:

The Gilligan Cut is a staple of classic comedy. Simply put, if the character says "I'm not doing this", no matter how many times they say it, chances are the character will do this for the sake of comedic effect, sometimes even while stating "I can't believe I'm doing this". It has three variants, but the staple between them is the sudden shift in scene. No cut, no Gilligan Cut.

Often combined with a Smash Cut if the transition is especially quick or the character is cut off mid-sentence. Compare Immediate Self-Contradiction and Instantly Proven Wrong where the contradiction is immediate in-universe.

Not to be confused with a Description Cut, which is where a description of what a character is probably thinking/doing is immediately contradicted by the character in question. See also Ironic Echo Cut and Cue the Falling Object. Another way of Tempting Fate. Contrast "I Know What We Can Do" Cut. Not to be confused with Cutaway Gag. This is a relative of Thinks of Something Smart, Says Something Stupid, and they can easily occur together if the thought comes before the cut and the speech after.

Note of historical interest: This was the first trope page ever to be put on This Very Wiki.

Gus is not okay

I Have All Week

She is Hating It

Alternative Title(s): Not Doing That Cut, Refusal Cut, No Cut To Yes

Gus is not okay

I Have All Week

She is Hating It