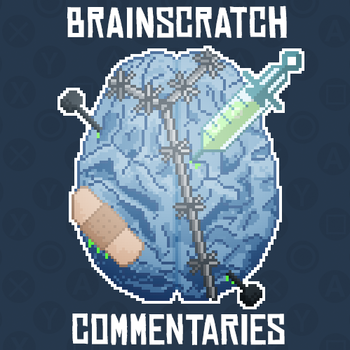 "You can't spell BSC without BS!"
"We're like gods, except we descend from the upstairs attic rather than heaven. So you can pray in silence, but if you're too loud, we're gonna stomp on the floor and tell you to shut the fuck up."
— Lewis

is a commentary group on YouTube, created by Nayrman214

(Ryan Malis) and comprising of himself, The One True Nobody

(Ted Wiesen) and Some Call Me Johnny (Juan Ortiz, though some call him Johnny). "Inspired" by Hellfire Commentaries, the quartet perform video game commentaries, as well as occasional movie commentaries and "random rambles," ranging from discussions of various irrelevant topics to the lampooning of the list-based opinions of such well-known gaming media outlets as IGN

. Known for their professionalism as might Ray Charles be known for his accuracy at the shooting range, these four up-and-coming commentators aim to provide various laughs at any cost — even at the price of their own intense boredom and sanity. As such, there is nearly as much padding in their commentaries as there is in the games they routinely lambast.

Ryan could be considered the "brains" behind the operation, as he was the one to come up with the hair-brained idea. He then pitched this hair-brained idea to Lewis, a fellow member of Find The Computer Room's forums, who then invited Johnny of the Super Gaming Bros. to take part. Sometime around 2010 or so, the trio became a quartet when Ted was made a permanent fourth member to add "youthful innocence to the jaded old men" in the group, as well as some cerebrally awful puns. In addition to our four main commentators, the team occasionally invites along a guest to join in the fun as an additional commentator — sometimes planned, sometimes at complete random

. The full list of commentators can be found at the Character Page.

What trope are we at?