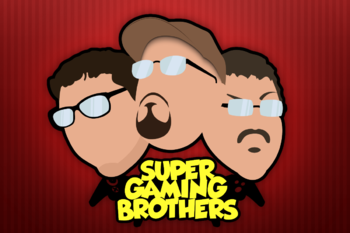 is a Let's Play channel run by Some Call Me Johnny. Originally the name of his series of series before changing it to simply "Johnny Vs." once his brother Elliot stopped reviewing alongside him (with the exception of the odd review here and there), the name of the channel is dedicated to Johnny and his brothers (and occasionally his uncle) and friends doing Let's Plays of games.
Advertisement:

The trio had announced and planned for 2020 to be their last year as an active channel. Due to the COVID-19 pandemic, the end of the channel was put on hiatus until the crew eventually decided to do their last batch of Lets Plays through Discord. With Johnny moving to Georgia in 2021, this brought a somewhat end to it. Johnny posting a video that was pretty much a send off to the Let's Play Channel

, though has stated they'll do one now and then whenever they get together.