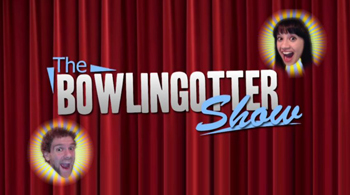 The Bowlingotter Show! *dong*
"Hi, I'm Bowlingotter!"
"And I'm LissySandwich!"
"And welcome to the B.S.!"
Advertisement:

Matthew (A.K.A. Bowlingotter) and Lissy (A.K.A. LissySandwich) Buckley are a husband-and-wife, YouTube-based Let's Play duo who host The Bowlingotter Show, released on Matt's main channel. They are best known for Let's Plays of horror games (both mainstream and indie), but have also done playthroughs of games in various other genres. The channel also hosts some game reviews and original music.

The Bowlingotter Show can be watched right here.

As of June 2017, they hired Conner Goad (A.K.A Keeper) as their editor, who handles the editing of all videos apart from small vlogs and announcements. Keeper has his own channel as well, which can be found here.

The Bowlingotter Show contains examples of: