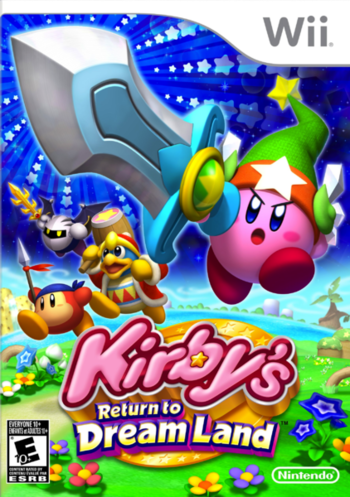 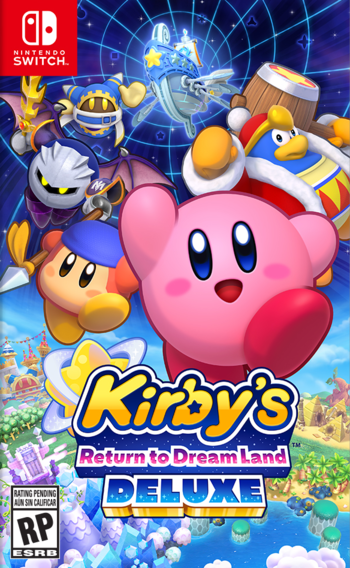 Kirby's Return to Dream Land (Hoshi no Kirby Wii in Japanese, and Kirby's Adventure Wii in European languages) is a game in the Kirby series for the Wii, developed by HAL Laboratory and published by Nintendo. While initially believed to be a finalization of the cancelled GameCube title shown off at E3 2005, Return to Dream Land, is, in fact, the fourth attempt at making a home console game

One day, while greedy King Dedede and Waddle Dee are chasing Kirby for his cake, a gateway suddenly opens up in the sky, and a ship known as the Lor Starcutter emerges. It crashes, and Kirby, Dedede, Waddle Dee, and Meta Knight (who happened to be in the area) must help Magolor, the ship's captain, recover its parts and get it working again...

Compared to the experimental approach of the series throughout the 2000s, a knock-on effect of series creator Masahiro Sakurai's 2003 departure from HAL, Return to Dream Land offers a modernized take on the gameplay style of Kirby Super Star, with far more action-oriented gameplay marked by a return to wide movesets for copy abilities. Additionally, four new copy abilities are introduced (Water, Whip, Leaf, and Spear), as are Super Abilities, enhanced versions of various powers that can each use Final Smash-like attacks. At the same time, however, the game also maintains the puzzle solving elements and storytelling style of the 2000s games, more cleanly consolidating them with the action platforming approach and setting the definitive prototype for later entries in the series. The game additionally features co-op multiplayer alongside Meta Knight, King Dedede, and Bandana Waddle Dee.

Several years later in 2018, it would gain a hard mode Game Mod developed by a dedicated fan called Kirby: Revenge of Dream Land which was released on October 31st, 2021.

A Video Game Remake, Kirby's Return to Dream Land Deluxe, was announced on the September 2022 Nintendo Direct and will release for Nintendo Switch on February 24, 2023. In addition to featuring a visual overhaul (and Dedede's Kirby and the Forgotten Land redesign), the remake adds the new Mecha ability and an enhanced library of subgames, including new games and remade subgames from past Kirby games such as "Samurai Kirby", "Smash Ride", and "Bomb Rally".

"A sad shell possessed by the limitless power of the Master Crown, no more than a manifestation of the crown itself."
Feedback