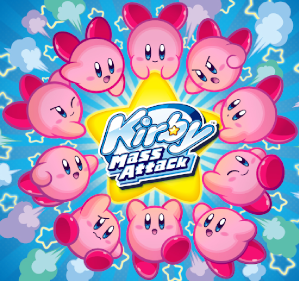 The fourth Nintendo DS game of the Kirby series, Kirby Mass Attack (known in Japanese as Atsumete! Kirby, or "Gather! Kirby") is yet another Spin-Off title, this time featuring a Lemmings-esque style of gameplay rather than the classic Power Copying found in most Kirby games.

The central plot revolves around Necrodeus, the Big Bad of the game, who splits Kirby into 10 smaller Kirbys while the original Kirby is sleeping. Necrodeus manages to kill all the Kirbys save one that escaped alive. The lone Kirby then goes off on an adventure to save Dream Land and fight Necrodeus to reunite himself once more. In the meantime, Kirby is joined by the returning Squeaks, and Daroach, their leader, helps Kirby by giving him hints and general tips along the way.