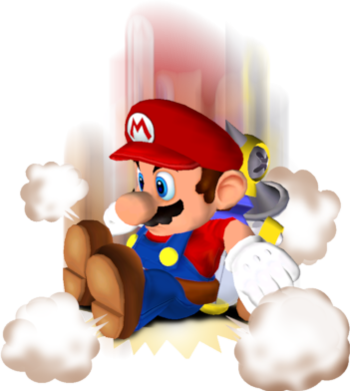 Essentially the more powerful relative of the Goomba Stomp, this is a near obligatory basic combat maneuver that involves the Player Character jumping, ducking, or crouching in the air, and then forcefully smashing/pounding/diving directly into the ground. Is also a common way of activating switches. If the attack sends out a wave of damaging energy, then it's a Shockwave Stomp.

This move is similar to the Double Jump and the Air Dash but in a downward direction. It tends to be mutually-exclusive with Falling Damage and does not harm the Player Character despite sending them plummeting. Don't think too hard about how any of it works.

Practically a staple of 3D platformers, but by no means limited to that one genre.

It is also a favorite boss tactic, often used by big and powerful bruisers who will leap up and off the screen before coming down upon your character unless he or she manages to get out of the way in time (usually the main warning the Player Character will get is a Shadow of Impending Doom upon them moments before impact).