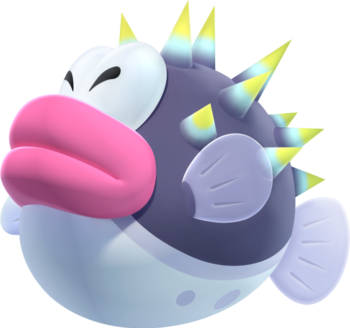 Being on the business side of these quills must be quite hurtful.
Pufferfishes are fishes from the order Tetraodontiformes and family Tetraodontidae that are well-known for their ability to inflate their bodies by inhaling water, so they can scare off predators and defend themselves. The closely related porcupinefishes (family Diodontidae) have a groovy bonus feature: their bodies are covered with Spikes of Doom that can deal a world of hurt to the poor souls that try to swallow them.
Advertisement:

They are as such often seen in fiction stabbing other people with their spikes. Sometimes they spear others by their own accord, other times they are weaponized by another character. Painful Pointy Pufferfishes are notably common in Video Games in the Under the Sea levels. Particularly nasty variants are even capable of poisoning those who are poked by their spikes. Nastier yet, their flesh contains a fairly strong neurotoxin. Fish bites man is not news. Man bites fish is fatal...to the man. (Unless you prepare it specially, in which case it's a delicacy

Sub-Trope of Fiendish Fish and Spikes of Doom. Related to The Spiny. If wielded as a weapon by another character, it is a Sub-Trope of Shamu Fu. See also Sea Hurtchin for another spiny animal used in a similar way.