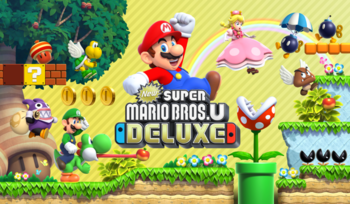 Both packs no longer sold separately! Toadette and Super Crown definitely included.note Does not actually work on Bowser.

New Super Mario Bros. U is the fourth game in the New Super Mario Bros. series and the direct sequel to New Super Mario Bros. Wii, following New Super Mario Bros. 2. It features Baby Yoshis with distinctive abilities, a new power-up called the Super Acorn that gives you a Flying Squirrel suit, and the ability to play the game as your Mii. There is also a "Boost mode" utilized by the Wii U GamePad that sets up Asymmetric Multiplayer by letting the person with the GamePad create platforms and assist in multiplayer sessions. Finally, there is (or was, as of November 8th, 2017) Miiverse integration, with various players' comments on levels or deaths coming up when appropriate.

With the return of Baby Yoshis, a powerup similar to the Super Cape, and an interconnecting world map, many Mario fans view this game as the closest thing we're going to get to seeing the unique elements of Super Mario World used in the modern Mario series.

In 2013, Nintendo released New Super Luigi U as part of The Year of Luigi, a new adventure featuring 80 new (half-sized and generally more challenging) levels that is offered as both an expansion and a standalone game. As shown by the title, Luigi takes center stage, and Mario isn't a playable character at all. Taking his place will be the rabbit thief Nabbit, who is immune to enemies, and cashes in power-ups for 1-ups instead of using them.

In 2019, New Super Mario Bros. U Deluxe, a port for the Nintendo Switch, was released. It bundles the original game and New Super Luigi U and adds Toadette as a playable character, giving her a new form called "Peachette", who plays similarly to Peach.

Ludwig splits into three to attack Mario. The real Ludwig shoots three magic blasts at a time while the clones shoot two.

Example of:
Me's a Crowd

Ludwig splits into three to attack Mario. The real Ludwig shoots three magic blasts at a time while the clones shoot two.