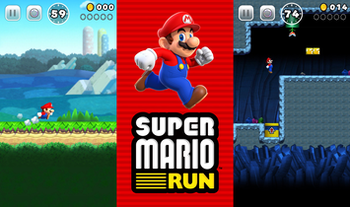 Super Mario Run is the first Super Mario Bros. game released on a non-Nintendo platformnote Not counting the licensed spinoff Hotel Mario as a part of Nintendo's ongoing plan to launch into a market of mobile games. Announced on September 7, 2016 for Apple devices the game released for Apple devices worldwide on December 15, 2016 with a release for Android devices following on March 23, 2017. Like Miitomo, the game was developed for mobile devices by Nintendo in conjunction with DeNA.

The game combines the standard Mario gameplay (specifically the style from the New Super Mario Bros. games) with that of typical endless runner games. Mario runs continuously through each stage, jumping by himself over small enemies and obstacles. By tapping the screen, the player can make him jump higher. Along with the typical goal of trying to get through each stage as fast as possible, the player must also collect as many coins as possible. Each stage has a stack of coin challenges that get progressively harder and are the main element that gives the game replay value. Along with the regular World Tour mode, there is also Toad Rally, where the player can challenge ghost players through the regular levels. Playing both modes and collecting coins within allow the player to build their Mushroom Kingdom in Kingdom Builder, the game's third mode. The fourth mode, called Remix 10, features ten bite-sized levels with three rainbow-colored medals in each level. Playing through each mode also eventually unlocks other characters, who each play differently.

In a subversion of typical mobile games, Super Mario Run is free to download, but with only the first world of World Tour available. A one-time $10 purchase will unlock the full game. Nintendo also requires the game to have an online connection at all times to play.