Advertising / The Year of Luigi 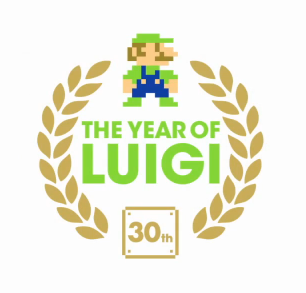 Pit: Look! It's Luigi!
Viridi: Always a bridesmaid, never a bride.
Pit: Aw, don't say that. After all, he even had his own year.
Viridi: I don't remember that.
— Palutena's Guidance conversation in Super Smash Bros. for Nintendo 3DS and Wii U
Advertisement:

For decades, while his older brother has acted as one of the most iconic and well-known characters in the history of video games, the other super plumber brother has never been more than the "King of Second Bananas." Not to say Luigi's ever been outright ignored, but divergent character evolution didn't do The Man in Green any favors. By the 2010s, he'd become the eternal kid brother forever stuck in his brother's shadow and, in spinoffs, the target of endless mockery and ridicule from NPCs. Heck, in the Mario & Luigi series, Bowser can't even remember Luigi's existence most of the time. So maybe he deserves a moment to feel like he's number one...

The Year of Luigi was a year-long Nintendo advertising campaign revolving around the aforementioned character, celebrating the 30th anniversary of his first appearance in Mario Bros.. The celebration began on March 19, 2013 and officially concluded on March 18, 2014, though products related to the event continued to release until July. During this celebration, four major Luigi-centric games were released, alongside various other pieces of content and merchandise.

The Year of Luigi included:

Games (in order of release)

This marketing campaign provides examples of: