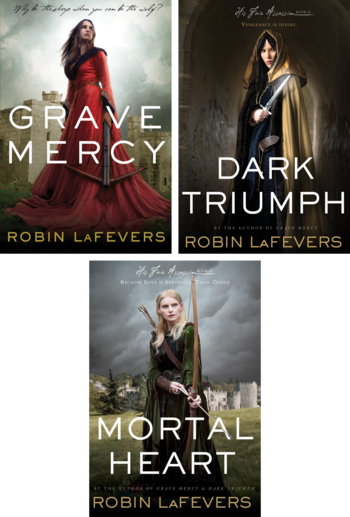 "Of course, many die without our help. However, there are those who deserve to die but who have not yet encountered the means to do so. At Mortain's bidding, we help them on their way."
— The Abbess on St. Mortain's mission
Advertisement:

A plot-heavy historical drama/romance trilogy by Robin LaFevers, revolving around the stories of three friends: Ismae, Sybella, and Annith — who are also all half-sisters, each being a Daughter of Mortain. Growing up in a convent under the tutelage of the handmaidens of Death and raised to be assassins themselves, they find themselves drawn into the political machinations of the power struggle between Brittany and France, as Brittany fights to retain its independence while France works to seize control of the country.

Tropes used in His Fair Assassin: