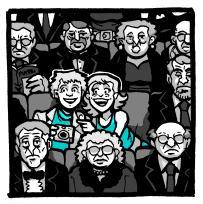 There are people who are not in the target audience, yet are the truest fans.

A notable bunch of audience members outside of the intended (i.e., marketed) demographic.

Western Animation has arguably been interwoven with this idea for most of its existence, and for a lot of reasons. First, the vast majority of what is produced is aimed at children and families. Second, despite more and more animation for older audiences being created, the only genre really represented is comedy (and usually of a darker, raunchier nature). And third, there's still a severe lack of cartoons specifically directed towards teenagers. As a result of all this, unless they only want to partake in the occasional independent film here and there, fans of the medium are guaranteed to find themselves watching a lot of content that isn't geared towards them (but probably has enough Parental Bonuses and good writing to make up for that).

Another very noticeable instance of this occurs in the anime fansub community. Digital recorders/encoders, which effectively remove the timeslot and language constraints to a program, make it accessible to anyone, and the series audience is largely drawn only by the perceived quality of the show itself as opposed to any marketing. Divorced from judgement-affecting advertising, a show packed with girls may be enough like "a show packed with girls" that the same fan will find themselves watching both, barely aware that said shows have wildly different target audiences. This likewise holds with male characters, who are often deliberately drawn as pretty boys in order to attract fangirls who were reading similar stories anyway (e.g., Bishōnen Jump Syndrome, because Shonen Jump was infamous for it). Sometimes this is taken a step further and you get a cleansed rough adaptation of the premise marketed directly to them.

It is also common for a popular franchise that is marketed towards children to gain an older fanbase if it's been around for a while; many of these older fans enjoyed it when they were young and simply never outgrew it. The companies making such shows may give little nods to the older fans (and sometimes even make new installments that cater exclusively to older fans). Some fans, perhaps because of these nods, seem not to realize that these popular kids' series are still made mainly for kids, and that doesn't change just because the older viewers are not kids anymore. Unfortunately, fans like these may cause negative stereotypes about nerd fanbases. See also Entertainment Below Their Age.

In another example that is similar to the above one, while the show might be targeted towards young boys or girls, those who are older and/or of the opposite sex may enjoy it instead and it may generate a large fandom (*AHEM!*), just to give one right off the bat as one of the more recent exaggerated examples of this occurring with a kids show.

Going in the opposite direction, a periphery demographic that is ''younger'' than the target demographic may arise from the fact that children and teenagers are liable to view media classifications as more a challenge than the warnings/suggestions they are. After all, engaging in media intended for mature audiences (like First-Person Shooter and Wide-Open Sandbox games) means that they can be considered mature themselves, right?

Can also be due to many demographics simply having wider ranges of interest than they're given credit for.

Series with strong marketing sense usually profit from being at least slightly aware of these fans, if not outright cultivating the work's newfound Multiple Demographic Appeal. Unfortunately, this creates the danger of an annoying Periphery Demographic being viewed as a Misaimed Fandom, if not outright Fan Dumb.

Also, some fans within a show's main demographic may consider the work in question a Guilty Pleasure.

When the Periphery Demographic is in another country, then you've got Germans Love David Hasselhoff. For a specific type of Periphery Demographic, see Estrogen Brigade, Testosterone Brigade, LGBT Fanbase, Popular with Furries. If a fandom forms around media that was not intended for entertainment purposes in the first place, it's Fun for Some. Compare Misaimed Fandom and Just Here for Godzilla. Contrast Periphery Hatedom. Not to be confused with fans of Periphery.

Most of its adult fanbase either consists of nostalgic adults who grew up with the toys when they were kids in the 80s and 90s or are collectors looking to keep the legacy of sylvanian families alive, some of the sylvanian families fandom being furries

A New Kind of Man

The Belchers discovers "The Equestranauts" are not only enjoyed by little girls but also by adult men who call themselves "equesticles".

A New Kind of Man

The Belchers discovers "The Equestranauts" are not only enjoyed by little girls but also by adult men who call themselves "equesticles".