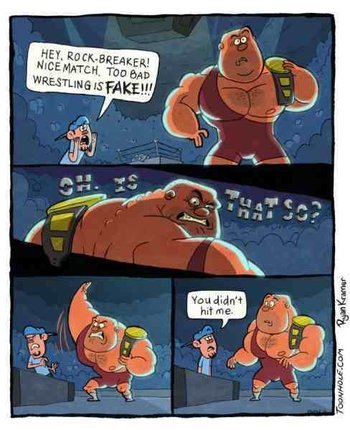 When you're a wrestler, you get used to this.
"Wrestling is for retards!"
— Convenience Store Clerk, Ready to Rumble
Advertisement:

Professional Wrestling was once the most popular "combat sport" in The United States of America. Over the decades, it's penetrated several markets the world over. Since the rise of cable television, however, it has increasingly slid toward polarizing status, with a growing number of people looking down on "fake" wrestling as well as those who like it. Being a wrestling fan is almost equivalent to being homosexual,note  sometimes literally atheist, vegetarian, mentally ill or any other Acceptable Target. So why is professional wrestling so frowned upon for being fake when several movies, TV programs, video games, and such that equally qualify are not? The reasons behind this usually stem from the belief that Pro Wrestling is fake drama that passes itself off as a real, competitive sport. For a while, it actually was, but for better or worse, figures in the industry (including Vince McMahon himself) have seen fit to expose pro wrestling's secrets to fans who were already becoming more aware of what happens behind the scenes. Other secrets have been revealed via publications such as The Wrestling Observer Newsletter, the increasing availability of websites such as Figure Four Online, and good old common sense. This ensured that those figures can never go back on their word. Pro wrestling is presented as legit on-camera, but off-camera, pretty much everyone in the industry will openly admit to it being a work. Combining that with the newfound popularity of mixed martial arts (created to be everything pro wrestling is with real fighting) and several unfortunate scandals that have hit the business (The McMahon steroid trial in 1992, for example) pro wrestling has been given somewhat of a bad name.

Common stereotypes of the wrestlers or business itself:

Finally, even the pro wrestlers who are untrained fighters still lift twice their body weight for a livingnote The person on the receiving end usually assists the throw, but 250 pounds is still 250 pounds and are accustomed to enduring pain and hard strikes, so any of them could easily eat a lot of punches and still break your arm with one of their "fake" hammerlocks. So yeah, you probably shouldn't piss off a wrestler if you happen to come across one.

All and all of pro wrestling is highly controversial; either you like it or you don't, with little middle ground and it is no different than any other media.