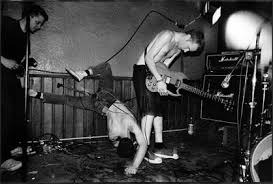 A Post-Hardcore band created in 1987 by Hardcore Godfather and Minor Threat veteran Ian MacKaye (vocals/guitar), Joe Lally (bass), and former Rites of Spring members Guy Picciotto (vocals/guitar) and Brendan Canty (drums). With an anti-corporate stance, cheap concerts for all ages, and heavy, rhythmic music, they released six studio albums (all on MacKaye's indie label Dischord) and held heart-pumping performances. They are one of the most important underground bands of the 1990s; their third album, In on the Kill Taker, made the Billboard 200 chart (peaking at #153), a rarity for an indie release. In 2003, the band called an indefinite hiatus, having been together for 16 years.

The name Fugazi originates from an acronym used by Vietnam veterans to signify “F’d up, Got Ambushed, Zipped In (a body bag).”

with the aim to "create a complete archive of the Fugazi live experience and to make these recordings available" to anyone. Over 800 shows are available for download, most recorded in high-quality, and for US$5 each.

It’s time to meet your tropes: