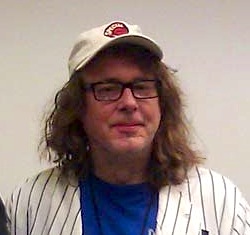 John Popadiuk Jr. is an American designer of arcade pinball machines, a self-proclaimed "game artist" dedicated to keeping the spirit of pinball alive. Despite being a relative latecomer to the industry, his passion and drive are reflected in his games and projects.

At six years old, Popadiuk created pinball tables with wooden boards, nails, and rubber bands for the kids in his neighborhood. He joined Bally's pinball division in 1980, working on and off as a whitewood lab technician. His prototype ideas never came to fruition, partially due to the buyout by Williams Electronics in the late eighties.

After an absence from the industry, Popadiuk rejoined Williams in 1993. His first commercially-sold design was the acclaimed World Cup Soccer, which he followed with a short but outstanding series of hits: Theatre of Magic, Tales of the Arabian Nights, and Cirqus Voltaire. His last design for Williams was Star Wars Episode I, released before the company closed their pinball division.

In 2006, Popadiuk designed consumer pinball machines for toy company Zizzle. Said machines stood at four-and-a-half feet tallnote half the size of an arcade pinball machine, could be assembled in minutes, and cost only $300. Zizzle ultimately discontinued them due to poor sales.

In 2011, Popadiuk founded his own company, Zidware Pinball, and announced three expensive, custom-built, limited edition games: Magic Girl, Alice in Wonderland, and Retro Atomic Zombie Adventureland. After four years of secrecy, Popadiuk ran out of money and halted production of the games; angry customers threatened Zidware with a lawsuit. Magic Girl languished in Development Hell until a new start-up, American Pinball, built and shipped the incomplete machines in 2017. Zidware's other projects have yet to be released.