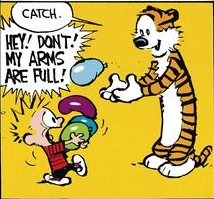 We superpowers have it tough.
Advertisement:

This is an action trope. It is performed by a character who throws something to another character (usually an enemy) to make him catch it — either to simply distract him or to induce something even more nasty. This can be made to escape a gunpoint situation. "Think fast!" is the same trope, worded differently.

A common way to show that a fighter is highly aware of his surroundings is for him to react to this with a No-Sell (throw an orange at him and it bounces off his chest) or a Nonchalant Dodge (throw an orange at him and he casually moves out of the way, not remotely distracted from the task in hand). Alternatively, they may perform a Catch and Return.

Can also reveal that an impersonator is Not Left Handed. Or is left-handed. Works not only for impersonators, but also for suspects — when you know that the crime was committed by a left-handed person.