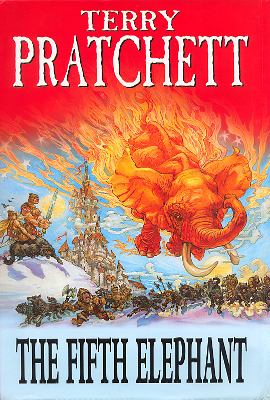 Sam Vimes is a man on the run. Yesterday he was a duke, a chief of police and the ambassador to the mysterious, fat-rich country of Überwald. Now he has nothing but his native wit and the gloomy trousers of Uncle Vanya (don't ask). It's snowing. It's freezing. And if he can't make it through the forest to civilization there's going to be a terrible war. But there are monsters on his trail. They're bright. They're fast. They're werewolves – and they're catching up. Sam Vimes is out of time, out of luck and already out of breath...
Advertisement:

The 24th Discworld novel and the fifth in the Watch theme. The Scone of Stone, an ancient dwarven artifact, has been stolen, and without it, the new Low King of the Dwarfs cannot be crowned. It's up to Sam Vimes and the Ankh-Morpork City Watch to travel to Uberwald and unravel the dark conspiracy surrounding the theft. Also, Vimes fights werewolves.

Very significant in that it introduced the Clacks, breaking the Disc's former tradition of Medieval Stasis maintained by the Reset Button (as lampshaded by Lord Vetinari), and (along with the previous book Carpe Jugulum) began a theme of Uberwald being an important story setting that would continue for several books.

Preceded by Carpe Jugulum, followed by The Truth. Preceded in the Watch series by Jingo, followed by Night Watch Discworld. Not to be confused with The Fifth Element.

The Fifth Elephant provides examples of: