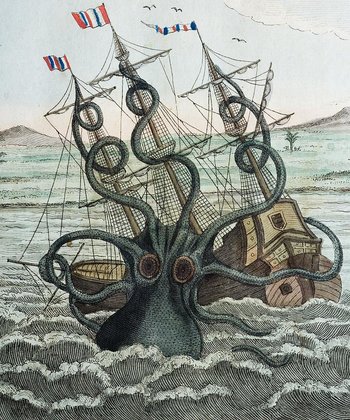 Squid, octopus, whatever. . . it wants to eat you.
"...Just so you understand exactly what it is you're dealing with: besides its eight huge tentacles, this thing has two whips. Each one is probably as long as this room and three or four feet thick. Those whips are covered with suction cups as big as this notepad. In the center of each cup is a claw as big as my fist and razor-sharp. The squid grabs and impales its prey with those whips and drags it towards its beak, shredding the flesh as it goes, and these things can shred a one-hundred-pound tuna in five seconds. Its beak is like an eagle's, only it's about fifty times bigger and can bite through steel. Now, you make a mistake trying to kill this thing, and it gets you first... you pray to God those whips kill you before you get to that beak."
— Whip Dalton, The Beast
Advertisement:

Aside from being a plentiful source of low grade calamari note  Extremely low-grade; they use ammonia to help them stay afloat, and ammonia is definitely not good eats in most parts of the world., Giant Squid are just as appetizingly useful for their role as Sea Monsters roaming the deep, attacking boats full of Cutthroat Island extras and being an all round menace to the high seas.

As a real life species, giant squid are believed to have inspired Norse tales of the Kraken and as one of The Oldest Ones in the Book had a lot of overlap with the epic Kraken and Leviathan. After Jules Vernes's 20,000 Leagues Under the Sea, the Giant Squid became a much more of a monster in the vein of any other "Gigantic Animal" monster: much more explicitly a larger version of something already known, scientifically unstudied but explainable and belonging to a realm not yet fully discovered, in this case, the depths of the sea.

Being mostly tentacle, the Giant Squid has a variety of ways in which it may be depicted on screen. You might see only the tentacles, perhaps the top of the head occasionally peaks out of the water. A full body shot may be a climatic reveal and seeing the beaked mouth may be reserved for the death scene of some poor sucker being slowly dragged into it. Very often the tentacles almost seem to act as their own monster following the principle of only taking what is on screen as being real.

Authors, designers and illustrators not always being sticklers for accuracy, the trope Giant Squid includes giant octopuses and giant-sea-creatures-that-are-some-weird-hybrid-of-squids-and-octopuses, as well.

On the Princess Peach cruise ship, Mario fights Paper Macho Gooper Blooper. It is a huge squid that attacks Mario with its tentacles.

On the Princess Peach cruise ship, Mario fights Paper Macho Gooper Blooper. It is a huge squid that attacks Mario with its tentacles.