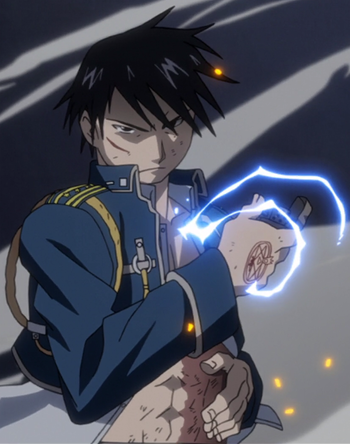 Imagine The Captain, but instead of a ship at sea or in the stars, they have a large contingent of ground troops. Still the most kickass guy around, powerful leader, outranks everyone else in The Squad, you know the type. Chances are, they're gonna be a colonel. (which is pronounced "kernel" by the way)

This is probably because "Colonel" is the highest military rank deployable in the field, the highest rank unlikely to be noticed and Authority Equals Asskicking on TV. Theoretically, General Ripper and The Brigadier should have more Power Levels than Colonel Badass but star ranks are for pen-pushers and quill-drivers. That's why the colonel always wins (unless you have a Four-Star Badass lurking around). The fact that an Army, Marine, or Air Force colonel and a Navy captain are technically the same rank may also have something to do with it, or it may just be coincidental.

This man is a professional, Married to the Job, and mission accomplishment is the entire purpose of his existence. He tends to be fairly young for a colonel, likely because he climbed the ranks rapidly after an outstanding performance in an earlier war or campaign as junior officer. When he's got full command of hundreds or thousands of troops, chances are he won't do much fighting himself on a day to day basis, because he's too busy managing the battlefield with a level of competence that prevents the enemy from ever gaining the initiative in the first place. If it ever comes down to it, though, his personal weapon will likely be a high caliber handgun — and while it won't be drawn often, it'll rarely miss when it is. Many have tried to kill this man, many of them extremely deadly in their own right, all of them have failed.

He won't break down over losses, but neither will he throw his men's lives away. If a General Ripper is his immediate superior, the two will almost certainly clash in styles, because not only is Colonel Badass a better leader but he's also more sane, more pragmatic, far more imaginative, doesn't give a crap about political concerns and values ability/utility wherever he finds it. In fact, chances are as good as not he rose from nothing himself, especially if the organization he's a part of doesn't usually encourage that sort of thing. He's an unstoppable force and an immovable object. He's loyalty incarnate, the best friend anyone can have; but he's also the embodiment of vengeance, and if you screw him over, your life is forfeit. Even if he dies he lives on as an ideal.

He is commonly an Officer and a Gentleman... or at least, tries to be one, as long as it doesn't hinder his badassness because this man does not suffer fools. His Evil Counterpart is the Colonel Kilgore.

For any Commonwealth Tropers out there this trope also counts for badass Wing commanders and Group captains as well. On the international stage, it applies to any badass with an equivalent NATO officer rank code of OF-4 or OF-5.

A universal trope, just like Colonel is a universal rank (Lieutenant Colonels are included, as are full commanders, the naval rank equivalent to Lieutenant Colonels in most western militaries). A subtrope of Authority Equals Asskicking. In terms of Authority Tropes, Majorly Awesome and Commanding Coolness are just a notch lower while The Captain is its equal in naval terms, while the next step up is Four-Star Badass.