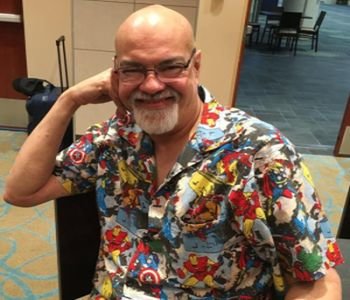 Even in a simple photo of him, it has thousands of characters crammed into a small space.
George Pérez (June 9, 1954 - May 6, 2022) was a legendary comic book artist. He began his career as an assistant for Rich Buckler at Marvel in 1973, and went on to work on several high-profile projects over the next forty years. He is most well-known for his love of drawing crowd scenes - Crisis on Infinite Earths featuring practically everybody in the DC Universe, or the cover of JLA-Avengers #3 featuring every single hero who had been a member of either team up to then (he actually sprained his wrist doing that cover, which ended up delaying the resolution of the crossover), or the opening arc of The Avengers volume 3 (right after the Heroes Reborn arc) featuring every Avenger up to that point reuniting and then getting redesigned into medieval outfits. His collaborating writers, such as Kurt Busiek and Mark Waid, have noted that they can use ideas that would scare away any other artist so long as Perez does the artwork. Outside of comics, he is perhaps most famous for wearing garishly bright Hawaiian shirts when he attends conventions.
Advertisement:

his retirement in 2019, citing various health issues. In December 2021 he announced on Facebook that he had been diagnosed with inoperable pancreatic cancer, with a terminal diagnosis of six to twelve months. He passed away peacefully in his sleep on May 6, 2022.