Film / Pirates of the Caribbean: At World's End 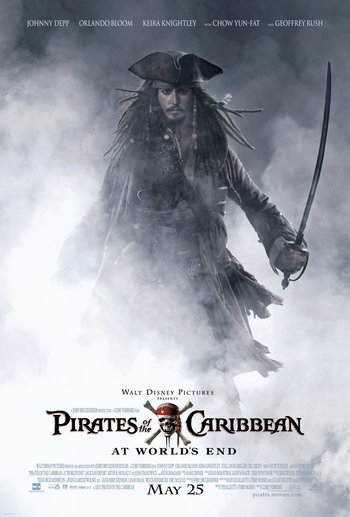 "World's still the same, mate. There's just less in it."
"You know the problem with being the last of anything; by and by there be none left at all."
— Barbossa
Advertisement:

At World's End (2007) is the third movie in the Pirates of the Caribbean franchise.

The third installment chronicles the adventures of Will, Elizabeth, and a newly resurrected Captain Barbossa in their journey to retrieve Jack from the afterlife. It resolves with the final showdown between the forces of Cutler Beckett (now with Davy Jones and the Flying Dutchman as their flagship), and the assembled pirate forces of the world, with an angry sea goddess thrown into the mix.

This installment was the most expensive film ever made at the time, costing $300 million before marketing, a record it held until Pirates of the Caribbean: On Stranger Tides in 2011 ($378.5 million).

The film’s events are adapted into a world for Kingdom Hearts III.

Unrelated to the 2013 movie The World's End or the video game World's End (though this movie did receive its own video game adaptation, by Eurocom and Disney Interactive Studios).

Pirates of the Caribbean: At World's End provides examples of: