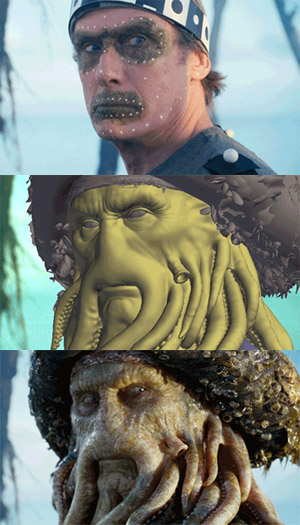 "Motion capture is exactly what it says: it's physical moves, whereas performance capture is the entire performance - including your facial performance. If you're doing, say, martial arts for a video game, that is motion capture. This is basically another way of recording an actor's performance: audio, facial and physical."
— Andy Serkis
Advertisement:

Motion Capture is a relatively new procedure that provides a more realistic alternative to the traditional process of animating a 3D computer-generated character. Depending on the goal (and how well the data translates to the CG character), anywhere from trivial to massive re-animating over top of the mocap data can be required. Motion Capture refers to capturing the movement of the body overall (head, torso, arms, hands, legs and feet), while Performance Capture refers to capturing the facial performance.

For it to work, a performer wears a skin-tight suit with tracking points on it: initially this was done with reflective balls, but technology is now advanced enough that high-contrast black-and-white circles can be tracked with a camera array* in the picture above, compare the ball on Bill Nighy's shoulder with the black-and-white headband, although folks tend to talk about the nylon-suit-with-golf-balls imagery since that's a much funnier thing to imagine George Clooney doing. The dots are placed on articulation and movement points (elbows, feet, knees, head, chest, etc), and an array of cameras track their position and movement. This data can then be applied to one or more CG characters (for example, in The Lord of the Rings entire armies were animated this way).

Performance Capture is a similar version that adds small dots applied to an actor's face, allowing a camera (such as one on a boom arm mounted to a cap) to record data on the facial muscles. Performance Capture exists because Motion Capture typically doesn't record facial data, nor fingers and toes. Before this the face was animated traditionally, and extra details not on the actor also need to be simulated or animated: Bill Nighy's tentacles didn't animate themselves!

Motion and Performance Capture have several advantages over traditional animation, namely that it's less time-consuming to give characters incredibly lifelike movement that would take an animator weeks to do. Its limitations are the sheer amount of animation data created (if you need to adjust an arm, you may have to completely redo its animation), and it doesn't quite look right in more cartoony art styles.

Rotoscoping is the manual, pre-computer version of this process.

Often a domain of the Serkis Folk.