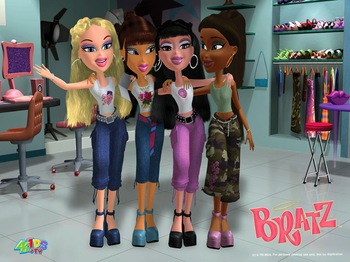 From L to R: Cloe, Yasmin, Jade, and Sasha.
Everybody now (mmh)
Time to show the whole world what were all about
We're the girls with a passion for fashion
Ooh Bratz
Always be there for each other
Ooh Bratz (yeah)
Stylin' how we feel (Ooh yeah)
Talkin' about best friends (Friends)
Together we can do anything
Gotta bend your dream make a chance and believe, make it real
B-B-Bratz!
—Theme Song
Advertisement:

Bratz is an All-CGI Cartoon that aired from September 2005 to October 2006 based on the hit Bratz toyline. The cartoon was later revived again in 2008, with season 2 airing in February of that year. In total, the cartoon had 40 episodes.

The cartoon stars four teenage girls - Sasha, Yasmin, Cloe, and Jade - as they run a fashion magazine. Their magazine, Bratz, began after Jade was fired from an internship from Your Thing. Jade's former boss, Burdine Maxwell, hates the girl's success and, along with her interns Kirstee and Kaycee, will do anything to stop the girls.

The 2000s Bratz series is unrelated to the future cartoons Bratzillaz and Bratz: C.I.Y. Shoppe Webseries as well as the direct-to-video films.