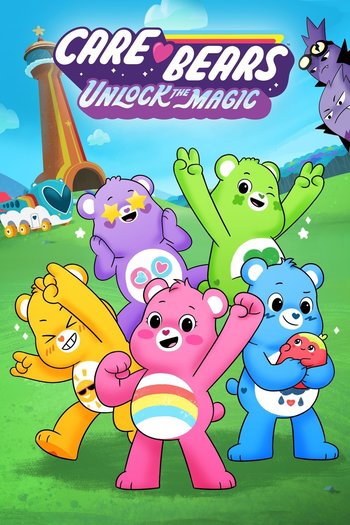 Caring is the key.
"Far away, in a mysterious place called the Silver Lining
The Care Bears face their mission
It calls for our Belly Badge power!
Getting help from back home, through the Caring Tower..."
— Expository Theme Tune
Advertisement:

Best friends Funshine, Good Luck, Grumpy, Share, and their new leader Cheer Bear, are sent away from their home on a mission to protect a mysterious place called the Silver Lining, which is inhabited by the Whiffles — innocently happy creatures who plant seeds to keep the magical land of Care-a-Lot and the neighboring Silver Lining growing — all while spreading caring and sharing throughout this newfound land. The quintet also retrieve help back home through the Caring Tower from their friends Bedtime, Tenderheart, and Wish Bear, while Dibble the Whiffle accompanies the Five-Man Band along the way.

It's not Care Bears without the Big Bad though, and this time it's Bluster; the annoying and egocentric leader of the Bad Crowd who once made a deal with the elder Care Bears to stay out of the Silver Lining in exchange for the Bears leaving him alone. He has since broken the agreement, and his goal is to turn the Silver Lining into Blusterland. His Beleaguered Assistant Robbie and Malcom help him carry out his schemes too, yet they always backfire.

Starting off a new generation of the Care Bears franchise, and following the cancellation of Care Bears & Cousins, Care Bears: Unlock the Magic is a 2019 TV series produced by the Cloudco Entertainment division of American Greetings. The first season consists of 52 episodes (though with how Boomerang has released them, it's 49). 10 episodes of the show were released on the Boomerang SVOD streaming service on February 1, 2019, including the Valentine's Day Episode, however the first episode was released on the app as a "sneak peek" on January 28. The series premiered on the main network in March, and premiered on Cartoon Network in April. In the UK, the show airs on Tiny Pop, and in Canada, the show airs on Family Jr. in English, both of which have aired a high amount of episodes before Boomerang has.

to see the theme song.

The show now has a character sheet.

Troping is the key...

Care Bears: Unlock the Magic has an opening theme that quickly explains the premise of the show while doing a Theme Tune Roll Call.

Care Bears: Unlock the Magic has an opening theme that quickly explains the premise of the show while doing a Theme Tune Roll Call.