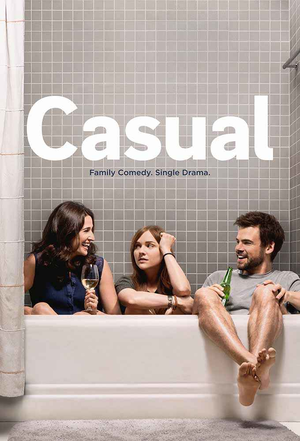 Casual is a 2015 dramedy series airing on Hulu, executive produced by Jason Reitman (Juno, Up in the Air). Unlike how Netflix uploads an entire season's worth of episodes for their Originals all at once, new episodes of Casual —and other Hulu Originals like The Mindy Project— drop weekly.

It stars Michaela Watkins (Saturday Night Live. Trophy Wife) as Valerie, a therapist in the midst of a messy divorce with an unfaithful husband that prompts her and teenage daughter Laura (Tara Lynne Barr) to move in with her younger brother Alex (Tommy Dewey), the (depressed) creator of a Tinder-like dating app. Eliza Coupe, Patrick Heusinger, and Frances Conroy also star.

Its ten-episode first season aired in Fall 2015; a second season of thirteen episodes began in June 2016.