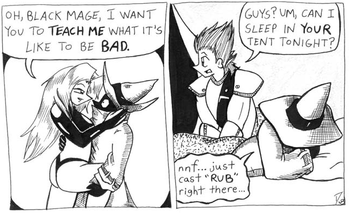 "Oooh Dream Weaver, I believe you can get me through the night..."
— Gary Wright, "Dream Weaver"
Advertisement:

The protagonist's sexual dreams about a friend or enemy causes them to reassess their relationship, perhaps realizing they're actually in love with them. Or not, just as long as they're having them. If the content of the dream is homoerotic in nature, expect this to either be played for laughs or used to increase the psychological ramifications of the dream.

Truth in Television, of course, though given how many things there are that can cause such dreams, the odds of them happening can often be put down simply to chance rather than any one thing in one's waking life. Among the things studied by science on whether they cause these sorts of dreams more often include sleeping prone (on your front) and eating a particular food prior to sleeping, such as mature cheese.

Super-Trope to Homoerotic Dream. See also, if they were denying UST before, Dreaming the Truth. If the other party is actually present thanks to Dream Walking or other magic, this becomes a Mental Affair.