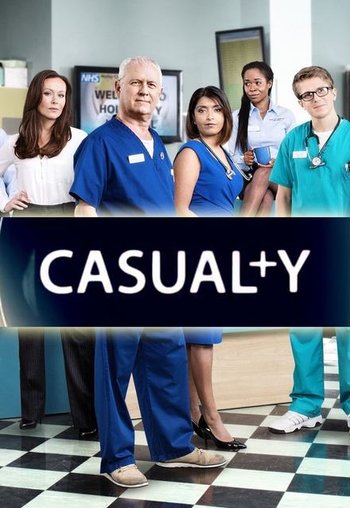 Casualty is a British hospital drama which airs on BBC One on Saturday evenings. Consisting of a mixture of Medical Drama and Soap Opera, the show debuted in 1986, making it the longest-running Medical Drama in the world.
Advertisement:

Set in Holby General Hospital, the show follows the character development and personal lives of the staff which work there. Coming in at a whopping 32 series and over one thousand episodes, the cast is wide, varied and constantly changing (the only constant is charge nurse Charlie Fairhead, who has been continuously played by Derek Thompson since the very first episode) not to mention the numerous Patients of the Week. Incidentally, Casualty has gained a reputation in later series, similar to that of The Bill, for featuring many well-known British actors, and launching the career of others.

Holby City, a spin-off, was spawned in 1999 and followed the lives of those working on the surgical wards; it drew to a close in 2022, after 23 seasons.