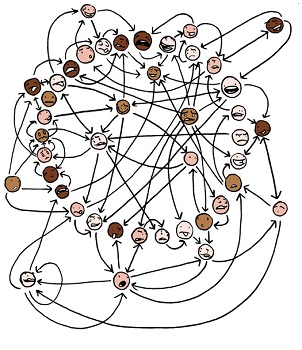 Love Triangles are stressful and often heartbreaking. Add five or ten more people to the mix, and instead they become comedy: Characters A, B, C, and D all love character E, who might love any of them, but can't commit for reasons of honor or basic wishywashiness. There's also character F, who might love E, and whom he might love back, but they get on each other's nerves so it's hard to tell. Meanwhile, G is sweet on C while H and I both love A. Except on alternate Tuesdays, when H's third cousin from Osaka expresses her intent to marry Character F's dog, who has an odd thing for D…

You get the idea.

Many series have official diagrams so the fans can keep track of the characters.

The Seven Basic Plots Christopher Booker uses this concept as his definition of the Comedy genre, only the point is that the Cleaning Up Romantic Loose Ends isn't a shoehorn but the soul of the plot:

The Villain (or Hero) acts as a Fisher King, casting a darkness and confusion across all the relationships until his Heel–Face Turn, which frees up the main couple to get together and that, in turn, frees up everyone else.

The Love Dodecahedronnote A dodecahedron being a geometric object with twelve faces (or for the Tabletop Games enthusiast, a d12). is a superset of the following tropes:

Also, see Gambit Pileup, which is similar to this trope, but with gambits. Though Love Dodecahedra can be the cause of such pileups. The opposite of this is No Loves Intersect. There are three kinds of stable Love Dodecahedra:

Can also sometimes be resolved by Squaring the Love Triangle. Compare Dating Do-Si-Do, which is similar with the lots-of-tangled-up-relationships part but the relationships do not necessarily have to be in competition with each other. Tangled Family Tree can be considered a sister trope, and a Love Dodecahedron can turn into one of those if given enough time. Video games that care about such relationships may track them dynamically with Relationship Values.