Comic Book / Battle of the Atom 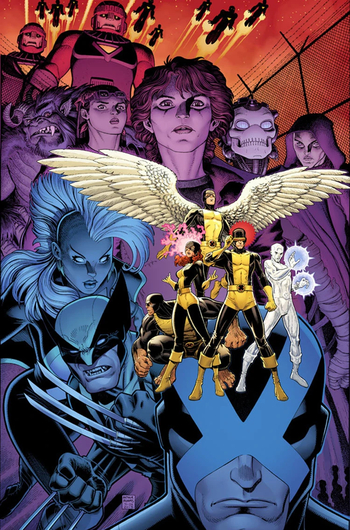 Battle of the Atom is a 10-part Bat Family Crossover published by Marvel that debuted on August 28th 2013 and ran through the All-New X-Men, Uncanny X-Men, Wolverine and the X-Men (Marvel Comics) and Adjectiveless X-Men books until October 30th 2013. In publication dates, the event lasted from November to December, 2013.

The story begins with Magik traveling to the future and witnessing a group of mutants fighting Sentinels. In the present, after Teen Cyclops is nearly killed in a Sentinel attack, which almost rewrites history and results in the modern Cyclops disappearing for a moment, the modern X-Men decide to send the time-displaced X-Men back to their own time. However, before they can, a future team of X-Men, consisting of Kitty Pryde, Molly Hayes, Xorn, Deadpool, Beast, Xavier (Legion's son and the grandson of Charles Xavier) and Ice Hulk (Iceman), appear to do the same, as the presence of the original X-Men in the current timeline will result in disastrous consequences. However, they do not tell anyone what these consequences actually are, thus making it hard for some to trust them. Also, they shield themselves from telepathy, making it even harder to discern if they are being truthful. Needless to say, all is not what is seems, and conflict ensues between various factions of X-Men, some believing that the original five X-Men should be sent back, some believing they should make the choice themselves, and some not believing the future X-Men.

Battle of the Atom contains examples of: