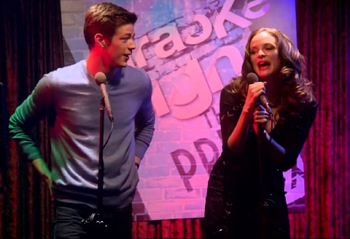 This trope is when a public karaoke performance spotlights the singer/s's relationships with the people in the room. It comes in two varieties:

Usually, this is done between love interests as a form of Ship Tease, Serenade Your Lover, or Falling-in-Love Montage, and 'gratuitous karaoke' is fittingly considered a Romantic Comedy staple. However, it can also be done between other sets of people for other reasons, such as a call-out or a reconciliation.

This is done because although singing karaoke in front of a bunch of strangers (or worse, acquaintances) can often be awkward, uncomfortable or embarrassing, it can be fun given the right mindset. Fittingly, karaoke numbers that do this often start out reluctant before the singer/s has/have a breakthrough and become more confident. In addition to moving relationships forward, this trope adds a musical number to a work that otherwise lacks it. It also allows for The Cast Showoff to showcase their vocal chops, even if they might be Hollywood Tone-Deaf at the beginning.

Compare Karaoke Box, which is the main use of karaoke in Asian media. Unlike this trope, Karaoke Box takes place in an isolated room and usually serves to highlight the dynamics of a group instead of a couple. See also Gratuitous Rap.

The NCIS Pearl Harbor team celebrates the closing of their case by heading to a karaoke lounge minus Tennant. Lucy's brought in order to get her to sing. And she does.

The NCIS Pearl Harbor team celebrates the closing of their case by heading to a karaoke lounge minus Tennant. Lucy's brought in order to get her to sing. And she does.