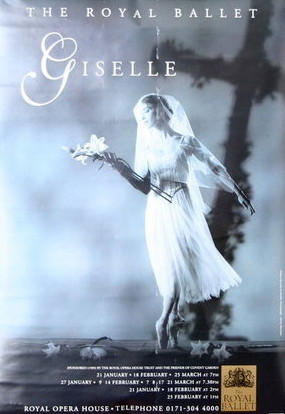 Giselle is a ballet created by Jean Coralli and Jules Perrot, composed by Adolphe Adam and first shown in 1841. It is said to have been inspired by a poem, and the famous wilis

in the second act are taken from Slavic Mythology, where they are ruthless virgins, jilted before or on their wedding day, who vengefully dance men to death. The ballet is well-known throughout the world and is considered to be one of the best productions a troupe can perform. It is said that while Swan Lake is the best ballet in terms of movement, Giselle is said to be the best ballet in terms of acting, with pantomime and expression telling the story of the ballet as well as the choreography.

The ballet begins happily on the day of a peasant festival, with a disguised nobleman (often a prince or a duke) named Albrecht, who has disguised himself as the peasant Loys. It is in this disguise that he courts the shy and naive Giselle, who falls in love with him while being wholly unaware of Albrecht's true self. After Giselle picks petals in a "He loves me, he loves me not" scenario (and after Albrecht plucks an extra petal while Giselle isn't looking so the flower will produce a "He loves me" answer), the two dance, only to be interrupted by Hilarion, a hunter who is in love with Giselle. Hilarion jealously warns Giselle against trusting strangers and proclaims his love for Giselle, only to be gently refused, and storm away. Giselle and Albrecht are later stopped by Giselle's overprotective mother, Berthe. She warns Giselle of being jilted, for a girl who dies before her wedding night is turned into a wili under control of Queen Myrtha and forever condemned to dance men to death. She herds Giselle back into their home and shoos Albrecht away.

Shortly after, a party of hunters enters the scene; among them are the countess (or princess) Bathilde and her father. They request shelter for Bathilde and refreshments from Berthe and Giselle. Giselle is enthralled by the beautiful noblewoman and her rich clothing, and dances for her, telling Bathilde of her happy engagement with "Loys", who is nowhere to be seen. Nevertheless, Bathilde gifts Giselle with her precious necklace before adjourning to rest in the cabin. The peasants return and dance some more and are quickly rejoined by Giselle and Albrecht. Just as Giselle is about to show Albrecht the necklace (or in some versions, tell him about Bathilde), Hilarion appears on the scene and angrily produces Albrecht's sword, then summons the hunting party with the horn left at Giselle's cabin. Albrecht quickly drops the peasant act when confronted by Bathilde, who happens to be his fiancée, and Giselle goes mad and dies tragically upon learning the truth.

The second act consists of Giselle, now one of the wilis, and her attempts to save the grieving Prince Albrecht from Queen Myrtha and her wilis. She succeeds, but must depart to the afterlife.