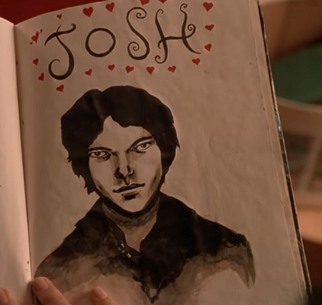 Shirley: Oh, it's a drawing of Abed with hearts all around it.
Troy: I didn't draw that. I bought that used. Must have been whoever had it last.
Annie: Obviously, it's a girl who has a crush on Abed. This is so romantic.
— Community, "Physical Education"
Advertisement:

This character is madly in love. How does the author of the story show it to the audience? One possibility is to have them doodle their beloved's name and symbols of love.

It often includes Mrs./Mr. Crush's Lastname, both names in a Cardiovascular Love-type Heart Symbol, initials plus initials equals love, banal love rhymes, hearts struck by arrows or Umbrella of Togetherness. The person they are crushing on has no idea they're an object of their affection. It can also involve even more daydreaming, like doodling about one's Celeb Crush or Perverse Sexual Lust.

The person in love is likely to be doodling in a random piece of paper, in a diary or a journal. It's a way of expressing one's feelings privately, in a place nobody else is intended to see what they drew or wrote. Except for one's closest friends. If the journal with the drawings gets lost, the character gets embarrassed and ashamed. No one is supposed to see those silly, kind of embarrassing doodles, but to drive the plot further, it often happens that someone is going to see it.

Sweetie Graffiti is a sister trope. Unlike doodles, graffiti is public, and as such, it is almost always the result of two lovers wanting to express their love publicly and permanently. They document their childhood or teen love on walls, or they carve the symbols on a tree or pole.

We see a glimpse into Dad's notebook, filled with doodles of Mom's name.

We see a glimpse into Dad's notebook, filled with doodles of Mom's name.