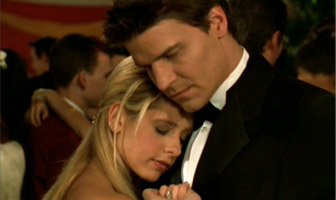 Buffy: No! You guys are going to have a prom. The kind of prom that everyone should have. I'm going to give you all a nice, fun, normal evening if I have to kill every single person on the face of the earth to do it!
Xander: Yay?
"Once again, the Hellmouth puts the "special" in "special occasion"
—Oz
Advertisement:

Buffy wakes up in Angel's bed at the mansion after the two fell asleep after patrol. Buffy talks a bit about bringing some of her stuff over so every once in a while she could spend the night and she mentions going to the prom. She opens the curtains to check for the sun, and accidentally lets in a strong beam, which hits Angel. However, he manages to move before it really burns him.

At school, Anya, still a mere human being, asks Xander to the prom. Both of them are dateless and desperate, so he says yes. Later, Buffy, Willow, Oz, and Xander discuss prom plans and dresses. Joyce visits Angel at the mansion and tells him she's worried about the effect he's having on her daughter. She tells him that he can't get in the way of her future, and if Buffy can't see that then he'll have to do something about it.

Buffy and Willow are talking prom dresses while Giles is continuing research for the Ascension. Using the pages that Willow ripped out of the Books of Ascension, it's been determined that, upon Graduation Day, the Mayor will transform into a demon. However, what kind of demon he will transform into is still unknown, and there's no further information at this point. As a result, the discussion moves onto the prom. Giles and Wesley (neither of whom see the point of it) will both be chaperoning the prom, which Buffy protests is going to be the one and possibly last night of fun they'll have in Sunnydale. Meanwhile, in a small house, someone plays a video for a caged dog-beast that makes it go wild.

Buffy and Angel are in a church getting married. As they exit the church, Angel is fearful of the sun, but it is Buffy that burns up and dies - not him - when they come in contact with the sun's light. Angel awakes from the dream.

While patrolling, Buffy and Angel head into a sewer in pursuit of a vampire as Buffy asks him what he's planning to wear to the prom, but Angel isn't interested and snaps that there's more important things to worry about.

Angel is still disturbed by his dream, the visit from Joyce, and the Mayor's words to them; after Buffy talks about how the prom and graduation are part of growing up, he finally tells Buffy that they need to talk. He tells her that it's unfair for her to be in a relationship with him because of all the things he can't give her. In order to make her realize how serious he is, he breaks up with her and tells her he doesn't want to be with her. Buffy refuses to accept this at first, and asks him how she's expected to keep away from him, and Angel tells her than he's going to leave Sunnydale after the ascension.Buffy goes to Willow for comfort and she realizes that Angel was right; the two of them really can't be together. But, after such a long and dedicated relationship falls apart so quickly, Buffy just feels horrible and cries.

At April Fools, a store where Cordelia Chase is working, Xander spots her through the window and goes in to tease her for what he perceives as her spending a long time trying to pick a dress. However, he's stopped short when an assistant chides Cordelia for speaking to a customer. Cordelia then reveals that because of her father committing tax fraud, she's now working there to save up for a prom dress because her family lost all of their money, and now she has nowhere to live and she can't afford to go to any of the colleges that accepted her. Xander is clearly shocked by this and can't come up with any words in response, while Cordelia says that he can go back to his friends, and laugh at her getting her comeuppance for teasing them all this time. However, their argument is cut short as one of the beasts that broke free breaks through the window. It initially attacks Xander, but then it spots a guy wearing a tux. Leaving Xander, the beast kills tux guy before rushing away.

At the library, the gang study the video of the attack as Buffy mooches in the background clearly distracted by her break-up with Angel. Wesley asks what Cordelia was doing in the store with Xander, and as Cordy struggles for a response Xander covers by simply claiming they were sniping at each other as usual. Cordelia notices that the beast has a preference for people in formal wear, while Giles and Wesley recognise it as a Hellhound, a vicious demon foot soldier bred for war. Suddenly someone is spotted on the tape who appears to be controlling the Hellhound. It turns out that the person is Tucker Wells, who used to have a chemistry class with Oz. Tucker has plans to ruin prom night by sending a hellhound trained to attack those in formal wear after the students. Willow, Xander and Oz all bemoan the fact that they're going to have to skip the prom since it won't be safe, and this snaps Buffy out of her funk as she declares that she won't let one jerk ruin the prom for her friends and she will do whatever she can to ensure her friends have their wonderful and special night (since she won't be able to anyway) and will do what it takes to ensure one jerk doesn't wreck it for everyone else. Buffy then issues orders for everyone to split up and search for clues. She ends up finding an address at the butcher where Tucker ordered cow brains to feed the dogs. She runs into Angel and the two have a post-break-up argument. As Cordelia leaves work upset that she won't be able to attend the prom as she couldn't save up enough from the dress, her co-worker tells her it's already been paid for.

Buffy returns from her searching and orders everyone else to attend the prom while she takes care of the hounds. She tells Giles that Angel is leaving town, and while she's upset her main focus now is stopping the Hellhound. She finds Tucker in his basement and confronts him about why he would want to destroy the best night of a senior's life. Tucker refuses to divulge his reasons, although it's revealed in a flashback that his only reason is that the girl he asked to go with said "no". Buffy ties him up before he can release the hound, but finds out that there are four other dogs, and three are already on their way to the school. Buffy rushes to Sunnydale High and, after a few close calls, manages to kill all of the dogs. Buffy changes into her prom dress and shows up for the dance. Everyone looks amazing dressed-up in their tuxes and formal dresses. Cordelia shows up and clings to Wesley (after thanking Xander for paying for her dress, restoring their friendship) while Anya tells Xander of her man-cursing past, much of Xander's discomfort. Willow and Oz just enjoy the evening.

When class awards are given out, Xander is snubbed for Class Clown. Then Jonathan goes up to the microphone and asks if Buffy is present. Everyone turns towards Buffy as a spotlight shines on her as she gets punch; it takes her a moment to realise that the attention is on her. Jonathan reads a speech in which the students acknowledge that they know a lot on unusual and weird stuff goes on at the school, and they also know that Buffy was always trying to protect them from it and that she's protected and saved almost all of the people present at the dance, giving the 1999 Graduating Class the lowest mortality rate in Sunnydale High history. He then announces that the senior class wishes to offer its thanks by awarding Buffy the first ever Class Protector Award complete with a trophy (actually a decorated parasol with a small plaque). Buffy, stunned beyond belief, walks through all the cheering students and teachers and happily accepts the award, finally allowing her to have a perfect high school moment.

Afterwards, the students enjoy the rest of the dance. Anya dances with Xander and finds herself not minding this part, while Giles tells Wesley to stop pottering about and just dance with Cordelia. Buffy then arrives, and Giles congratulates her on her work on getting rid of the Hellhounds, and expresses his surprise that the class could be so gracious. Buffy tells him that people can surprise you sometimes, and Giles sees something at the door and takes Buffy's award from her. Buffy turns and sees Angel standing there in a tux. He tells her he understands that it's an important night for her, but he still meant what he said before. Buffy tells him she understands and the two dance, trying to make the most of what little time they have left.