NOTE: Spoilers from this book are marked as usual. However, as this book is meant to be read after watching the entire series, all spoilers from the show have been left unmarked. As such, You Have Been Warned. 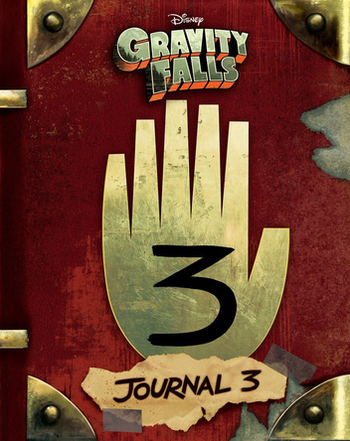 Your guide to bringing about The End of the World as We Know It.
Advertisement:

Gravity Falls: Journal 3 is a Defictionalization of Journal 3, the main research and reference journal used by the main characters in the popular Disney Channel mystery/comedy animated series Gravity Falls. The book was written by series creator Alex Hirsch and writer Rob Renzetti, and illustrated by Andy Gonsalves.

Consisting of every page shown in its cartoon counterpart, plus many pages never-before-seen by fans, Journal 3 also includes entries made by main characters Dipper and Mabel Pines over the course of the show, as well as those made by the Author of the Journals prior to his mysterious disappearance in the 1980s.

The first edition of the book released on July 26, 2016. After high sales, a limited-edition versionnote (a total of 10,001 copies were printed, including a pre-release edition with no number) featuring the all the black-light messages present in the show's journal, as well as several new invisible messages, was released on June 13, 2017.