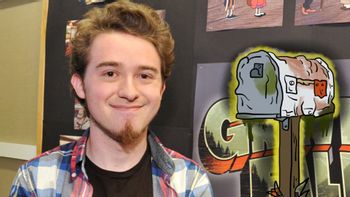 "Alex is a guy who's so self-aware that he cameos in Disney shows just because they want to remind people they were the channel he pitched Gravity Falls to."
Advertisement:

Alexander Robert Hirsch (born June 18, 1985) is the creator of the Disney show, Gravity Falls, where he also provides the voices of many characters, including Stan Pines, Jesus "Soos" Alzamirano Ramirez, Fiddleford McGucket, and Bill Cipher. He based a lot of the series on his own childhood experiences.

Prior to Gravity Falls, he got his start at Cartoon Network storyboarding on The Marvelous Misadventures of Flapjack (Pendleton Ward of Adventure Time fame was his board partner). He went on to co-develop Fish Hooks for Disney before moving onto his masterpiece.

After Gravity Falls ended its run in 2016 (with the stated intention of avoiding Seasonal Rot), Hirsch became involved with the film-making industry, providing some contributions for the stories of Pokémon Detective Pikachu and Spider-Man: Into the Spider-Verse, but left both during pre-production. Hirsch is currently a voice actor and creative consultant on The Owl House, and is co-producing a Netflix series entitled Inside Job.

He wrote two Interquel works for Gravity Falls: a Defictionalization of the iconic Journal 3, and a graphic novel titled Gravity Falls: Lost Legends.