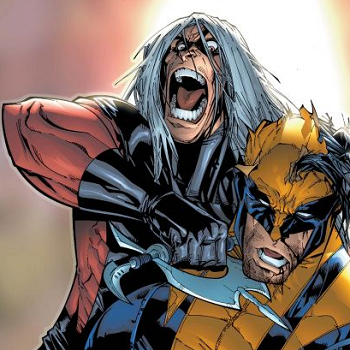 "Adonis is one of the main characters this thing circles around, but he does have one distressing feature. SILVER HAIR. This means nothing good can come of him. YOU KNOW THE RULE ABOUT SILVER HAIR."
— Zarla, Let's Play: Silver Chaos
Advertisement:

Despite the wide range and use of Hair Colors for characters, there's an eerie specificity to the use of white/silver hair when coupled with a pale, handsome, vaguely-effeminate face. It is often combined with Face of an Angel, Mind of a Demon in order to cause an uncannily angelic appearance of a demonic being. The (usually long and rarely tied back) white hair is very frequently coupled with red eyes and often with a dark outfit for contrast. Odds are the character is the Big Bad, or sometimes The Dragon or otherwise a major villain; Mooks and minor villains almost never get this treatment.

Compare with Light Is Not Good and White Gangbangers. Compare and contrast with someone who has Mystical White Hair, who is less likely to be evil and more likely to be magical, superpowered, or otherworldly (although the two can very much interact, since the otherworldliness itself is what makes a white-haired villain so unnerving). When an albino phenotype is seen as this and ostracized because of it, it may be Albinos Are Freaks. Angry White Man is a similar trope but with anger instead of evil being an emphasis, although both can overlap each other.

They never come back as BOYS!

The coachman's demonic face after that promise, has birthed many a nightmare to young children.

They never come back as BOYS!

The coachman's demonic face after that promise, has birthed many a nightmare to young children.