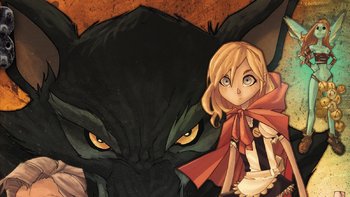 Fairy Quest is a Comic Book series by Paul Jenkins.

In the land of Fablewood, every Fairytale and fable you've ever read exists side-by-side. And under Mister Grimm's rule, they all stick to their roles in their stories VERY closely. Any deviations, and those who do so find themselves subject to the Mind Eraser.

Enter Red, a young girl with a red hood, and Mister Woof, a very big wolf. The two are supposed to be enemies in their story, but they decide they want to be friends instead. Naturally, Mister Grimm frowns upon this, and wants them back to being what their story says they are. Red and Mister Woof don't want to go through the Mind Eraser, of course. So, they decide they need to escape to someplace Mister Grimm can't reach them. They hear of a place called the "Real World", and decide it's the perfect place for them to go.

So, the two set out to find this fabled "Real World" in the hopes of getting to keep their friendship.

The series has two books in the series so far.