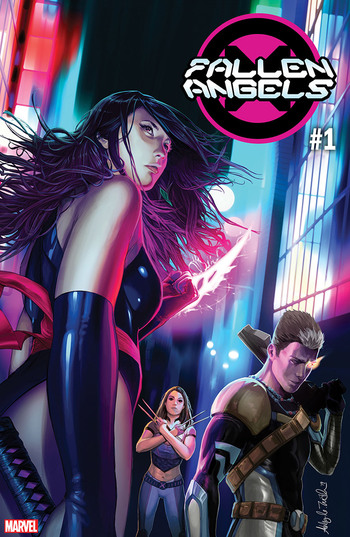 "You are not dreaming, Psylocke. Listen. These are the most important words you will ever hear. Your enemy is named Apoth. You must kill a god. Do not ask my name! When Abraham heard the voice of truth, he did not ask. He listened. He placed his child on the slab. He raised the knife. I am truth. And you are not dreaming. You'll wither here, Psylocke. In the bosom of Xavier's peace. Take up this war."
— Fallen Angels #1
Advertisement:

Fallen Angels is a 2019 comic book series, starring Kwannon (formerly known as Revanche) as the new Psylocke, alongside X-23, Kid Cable, Husk and Bling. The series is part of the Dawn of X relaunch, and was written by Bryan Hill (Detective Comics (Rebirth)) and drawn by Szymon Kudranski (The Punisher).

Psylocke finds herself in a new world of mutantkind, not sure of her place in it. When someone from her past is murdered, she joins two other individuals with a similar outlook to help her on a quest for revenge, a quest that could jeopardize all of mutantkind!

Not all belong in paradise. Some become fallen angels.

The series ended after 6 issues. Hellions serves as a Spiritual Sequel with Kwannon as a main character.