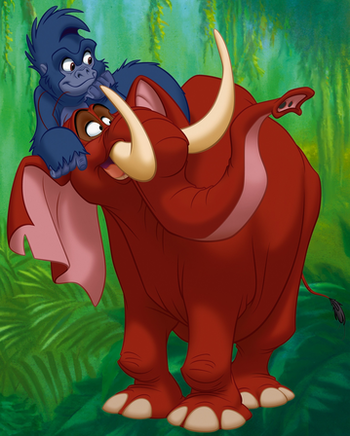 Just because one doesn't have opposable thumbs doesn't mean they can't both hang out.
"I don't mind having a demon friend."
— Fuka Kazamatsuri, Disgaea 4: A Promise Unforgotten
Advertisement:

In everyday life, you're unlikely to know anyone of a different species to yourself, besides pets, and however much you might love your furry/scaly/feathered friends, the relationship probably isn't quite the same as the one you have with your bipedal ones. Animals in question also have a tendency to fight each other over food and territory.

In fiction, this restriction is way more lax, especially in the realms of Fantasy and Science Fiction. Those worlds are populated by a whole host of fantastic aliens, elves, werewolves, robots, vampires, and who knows what else. It's incredibly common for people of completely different species to become close friends. Since the majority of these creatures tend to have an intelligence on par with — if not greater than — that of humans, it might be stranger if people of various species didn't develop some sort of kinship. Even for species that are Always Chaotic Evil, you can expect at least one individual to throw off his hat and say My Species Doth Protest Too Much, thus joining the good guys.

Sometimes, in universes where the existence of other magical/advanced races are part of The Masquerade, or there's a lot of Fantastic Racism going on, these friendships might be more limited. This will usually allow people to comment on how strange the hero(e)s' friendship is.

Loyal Animal Companion is a Subtrope. See also Androcles' Lion, A Boy and His X, Monster and the Maiden, and Predator-Prey Friendship. One of these may lead to a Mayfly–December Friendship.