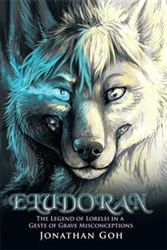 Where did we go so wrong?
"Nothing gold can stay."
— Robert Frost
Advertisement:

Being a princess isn't always what it's cracked up to be. Apparently, things get even worse when your older brother is better than you in everything. Tired of remaining in another's shadow, Lorelei learns this lesson the hard way when she undertakes an epic adventure to win her father's affection—with disastrous results. It soon occurs to her that the outside world is entirely different from what she has been used to, and she is obliged to learn its workings in order to survive.

Violently thrust into hostile and alien surroundings, Lorelei needs to subvert its rules to her advantage. She is given the chance to do so when an accidental misunderstanding earns her the respect of the local juveniles, placing her in a position of power within their circles. Suddenly, everything seems to have changed for the better. Surely it can't hurt to maintain this illusion for a little while longer? Bending a few morals along the way isn't too high of a price to pay, given the alternatives. What could possibly go wrong?

Too bad she hasn't counted on how attractive the first taste of power can be. Or how difficult it is to hold on to it. Or how often it is that people only recognize the importance of something after that thing has been well and truly lost.

The narrative poem was released in hardcover and paperback format and is available at www.eludoran.com