Anime / 3000 Leagues in Search of Mother 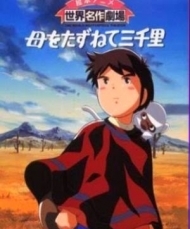 3000 Leagues in Search of Mother (母をたずねて三千里 Haha o Tazunete Sanzenri) is a Japanese anime television series directed by Isao Takahata and aired in 1976. It is loosely based on a small part of the novel Heart (Cuore) created by Edmondo De Amicis, i.e., a monthly tale ("racconto mensile") From the Apennines to the Andes (Dagli Appennini alle Ande)note (the Ligurian Appenine mountains reach to the Gulf of Genoa, where Marco comes from; Anna works in Argentina, which shares the Andes mountains with many other countries like Chile, Bolivia, etc.), widely expanded into a 52-episode epic. It's also a part of the famous World Masterpiece Theater.

The story follows an 8-year-old boy named Marco Rossi, who lives with his family in the port city of Genoa during a very harsh economic crisis. His parents Pietro and Anna, plus his brother Tonio, work hard and do their best, but they barely can make it month by month... so Anna takes a fateful decision: to go to Argentina, in South America, and work there to help.

While this seems to work more or less fine at first, soon Anna's letters stop arriving, and nobody knows what's going on. Since Anna's last letters imply that she had fallen gravely sick, Marco decides to go to Argentina himself and see if Anna is fine or not. With his brother's pet monkey Amedio in tow, Marco boards a ship and leaves his homeland, determined to find his beloved mother no matter what.

3000 Leagues in Search of Mother includes these tropes: