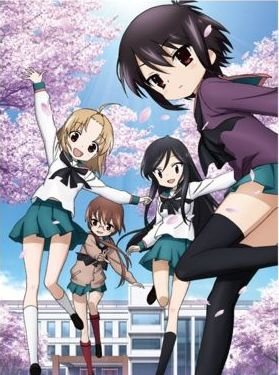 A Channel is a Japanese Seinen yonkoma by bb Kuroda. The story is about the daily life of Run, a second year High School student, her classmates Yuuko and Nagi, and first year student, and Run's childhood friend, Tooru. The series follows their quirks with their teachers and classmates.

The manga was serialized in Manga Time Kirara Carat from 2008 to 2021, with eleven volumes released. An anime adaptation by Studio Gokumi (the first anime produced by the studio) aired in spring 2011, with two Original Video Animation episodes named A Channel +smile released on early 2012. There's also a prequel manga, A Channel ~days in junior high school~, which is... well, the story of how Run and Tooru met and their life in junior high school. It started serializing in Manga Time Kirara Carino from January 2012.

Not to be confused with Special A or A-Channel (the former name of Canadian TV network CTV Two or of fellow Canadian network Citytv in some areas of Western Canada).

A Channel provides examples of the following tropes: