Anime / Heidi, Girl of the Alps 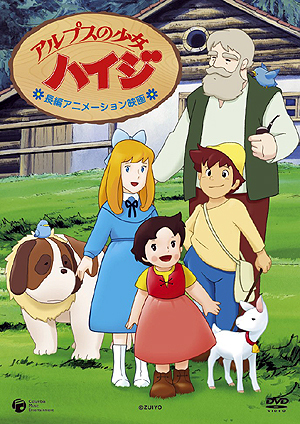 Heidi, Girl of the Alps is a 1974 Anime series that ran for 52 episodes based on the famous Heidi's Years of Wandering and Learning Swiss classic children's novel by Johanna Spyri, which was created as part of the World Masterpiece Theater series.note Zuiyo Eizo, the producing animation studio, would split into Zuiyo Company Ltd. and Nippon Animation in 1975, with the latter encompassing Zuiyo Eizo's animation staff. Zuiyo Company Ltd. has continued to hold the show's copyright as well as that of Vicky the Viking, although all subsequent WMT series were Nippon Animation productions, and Nippon Animation holds the copyright of A Dog of Flanders and Maya the Bee, which began as Zuiyo works and transitioned to Nippon Animation productions while still airing. The anime featured the talents of Yoshiyuki Tomino (storyboards), Isao Takahata (director) and Hayao Miyazakinote the core of what would become Studio Ghibli (animator). Also, the character designs were done by Yoichi Kotabe, likely best known in the West for his later work with Nintendo.

It tells the tale of Heidi, a five-year-old orphan who is pretty much dumped by her aunt on her grandpa, a gruff man with a bad reputation who lives alone in the mountains. Heidi quickly melts the old man's heart and makes a friend in Peter, a goatherd six years older than her, and Grandpa's huge St Bernard dog, Josef/Joseph (renamed in many foreign dubs for some reason as some variation on the word "fog"). Just as she has gotten cozy in the Alps, her aunt comes back and tricks her into leaving the mountains for Frankfurt to become the companion of a lonely, rich girl bound to a wheelchair, Klara Sesemann. Once again, she makes friends with the whole household (except for uptight old hag Mrs. Rottenmeier), but she gets increasingly homesick, to the point that she starts sleepwalking. For her sanity's sake, she's allowed to go back to the Alps, with the promise that Klara will be allowed to visit her there. Which just happens to be exactly what Klara needs for her health...

First telecast on Fuji TV, Heidi was a big success, and it is still fondly remembered in Japan and many foreign countries, particularly in Europe and Latin America. Not so much in English-speaking countries, as only a movie-length edited version of the show (put together without Takahata and Miyazaki's input) made it to home video in UK and USA; the edited version also aired in the early '80s on HBO. Canada was more fortunate, getting the entire series in French on Radio-Canada television. Video game players (especially those who may have never heard of this version of the story) may recognize part of the opening theme from the arcade game Froggernote Specifically, the second "yodeling" part.

In 2014, Belgian animation company Studio 100 produced a CGI remake that trims down the number of episodes (from 52 to 39) and makes slight changes to the story (for example, Heidi's aunt comes to live with her at Clara's house instead of just leaving Heidi there and dissapearing, even falling in love and becoming engaged to Sebastian, Clara's family butler).

Do not confuse with Heidi's Song, although both are based on the same novel.

A lot of the tropes in this series are already covered at Heidi. Tropes exclusive to Heidi, Girl of the Alps include the following: