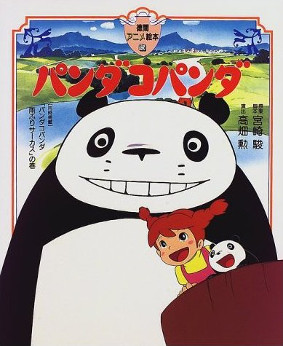 A pair of animated shorts from the early 1970s. They are most notable for being some of the first anime created by Hayao Miyazaki. The design of the pandas also parallels the design of the Totoros from My Neighbor Totoro.

In the first one, simply titled Panda! Go Panda! a young girl named Mimiko finds a small panda on her doorstep, who she calls Panny. Soon after, Panny's father, Papa Panda, shows up, and offers to be Mimiko's father as well. She accepts, though she takes a more motherly role to Panny. However, it turns out that Panny and Papa Panda have escaped from the zoo, and police and zookeepers soon come to take them back.

In the second, Panda! Go Panda!: The Rainy-Day Circus, a baby tiger called Tiny shows up at Mimiko's house as well. She takes him in, but it soon turns out that Tiny comes from the circus, and he takes Panny with him to meet his mother. Mimiko follows, and eventually gets Tiny back to his mother and takes Panny with her, after getting tickets to the show. However, a huge rainstorm completely floods the valley that night, forcing Mimiko and the pandas to free the circus animals.