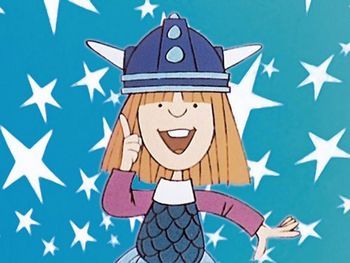 "Ah-HA!"
A Swedish book series created by author Runer Jonsson in 1963, with new installments coming out through the 1980's.
Advertisement:

Vicky the Viking is about the adventures of the titular character, the only son of the Viking chief Halvar of Flake. Vicky accompanies his father and his crew on their voyages and pillaging sprees, and though he lacks in physical strength, he proves himself useful by using his brains instead of brawn in solving the problems the Vikings face.

An animated series (Chiisana Baikingu Bikke in Japan, and Wickie und die Starken Männer in Germany) was made as an International Coproduction between Germany's Taurus Film and Japan's Zuiyo Enterprise.note Zuiyo's animation studio split from its parent company and became Nippon Animation in the summer of 1975, while the show was still on the air, but although the show was credited to Nippon Animation for the rest of its broadcast run, it is Zuiyo, and not Nippon Animation, that holds the copyright to the series in Japan to this day. It lasted for 78 episodes on ZDF in Germany and Fuji Television in Japan, and has been adapted into many languages, including Spanish, French, Italian, Polish, Arabic, Dutch, Portuguese and (naturally) Swedish. The French dub is much-loved in Canada, where it aired on Radio-Canada and was later rerun on Télé-Québec and Teletoon.

It was adapted to animation once more as an All-CGI Cartoon in The New '10s by Belgian company Studio 100. This newer series ran for 78 quarter-hour episodes, and has also been broadcast in numerous countries and languages. However, neither show has come to the United States. note Up until now. Recently the original series has been made available to Americans through Amazon, and the newer series is streaming on Netflix

A Live-Action Adaptation was made in Germany in 2009. Speaking of Germany, a whole area is themed after Vicky's world at Europa-Park.

The anime series in particular was an influence on Eiichiro Oda, the creator of One Piece